Peterhof, whose origins date back to the eighteenth century, was successively Russian monarchs seaside summer residence, educational centre and​​ from twentieth century,​ a museum complex which is UNESCO World Heritage site. With the parks and gardens, the ​​Grand Palace and various pavilions, it spreads over 200 hectares facing the Baltic Sea. More than 150 fountains, four cascades, statues of ancient gods and heroes are hidden in the ornate gardens and landscaped areas of Peterhof.

The gem of the fountain complex is the Grand Cascade located in the heart of Peterhof – the biggest fountain construction of the ensemble and one of the most outstanding creations in the world consisting of 64 fountains and 37 statues. The composition of the cascade allegorically glorifies the might of the Russian state and Russian victory in the Northern war in 1721.

Majestic and elegant Grand Palace, with its facade stretching for almost 300 meters rises above the Grand Cascade connecting the Upper garden and the Lower park. The Upper Garden is the welcoming grand entrance to the imperial residence. Its layout has been executed according to the plans of Peter the Great. The Lower Park was created as the regular garden based on French formal gardens design and is decorated by 150 fountains. Several buildings are scattered over its grounds: Monplaisir  and Marli Palaces as well as the pavilions such as Hermitage and Catherine Block.

This tour is a perfect combination of a fresh sea air, history and beauty.

Get ready to see the Russian Versailles and get some fresh sea air!

Daily. Closed on Mondays and the last Tuesday of each month.  Please note that the fountains only operate from May until the end of September.

Grand Cascade is a symphony of fountains and canals facing the Gulf of Finland.

The Ballroom at the Grand Palace in Peterhof

The walls of the Ballroom are decorated with gilded carving, the mirrors create the impression of the endless perspective visually increasing the space. 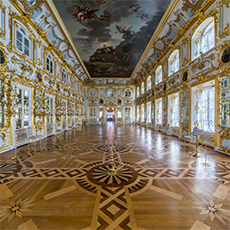 Monplaisir Palace located directly on the shore of the Gulf of Finland was the favorite suburban palace of Peter the Great. 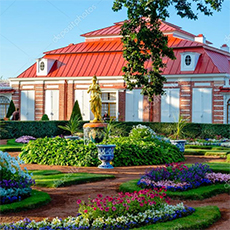 Amazing collection of gilded fountains, statue-lined lanes and picturesque canals can be found at the Lower Park.