In the very heart of Saint Petersburg built on the island on Neva River the Peter and Paul Fortress proudly dominates the city skyline with its cathedral being the highest historical building in the city. Built by the order of the Peter the Great in 1703 to protect the delta of the Neva River from the Swedish fleet the Peter and Paul Fortress started the history of the magnificent city and is truly a place of power with all Russian Emperors and their families buried here in the Grand Ducal Burial Chapel.
Never fulfilling its intended defensive function it was once a military base, prison for political or highborn prisoners often referred as the "Russian Bastille" and nowadays welcomes visitors as a part of St. Petersburg Museum of History. Several permanent and temporary exhibitions related to the history of the Fortress and the city can be found within its walls as well as a number of historical buildings including the oldest enterprise in St. Petersburg - the Mint that still produces coins, medals and badges.
Undoubtedly Peter and Paul Cathedral with adjoining Grand Ducal Burial Chapel is the one of the main attractions of the Peter and Paul Fortress, designed in Baroque style combining typical features of West-European church architecture. Another points of interest within the Fortress walls are St. Peter’s Gate – unique triumphal gate preserved from Peter the Great’s time dating back to 1718 and famous Monument to Peter the Great which resembles the First Russian Emperor with great accuracy.
Come and learn the heart of the city with an opportunity to have a picnic by the river afterwards!

Discover the starting point of the magnificent Peter the Great city.

Aerial photo of the Fortress

The shape of the fortress is a hexagon with unequal sides. During construction works the principle of bastion was used for the first time in Russia.

In 1712 architect D. Trezzini began a large-scale construction of the Peter and Paul Cathedral. The construction work continued for more than 20 years. The temple had a unique and new design for the 18th century.

The inside of the cathedral holds a fantastic iconostasis, completed by a group of more than forty Moscow architects under Ivan Zarudny from 1722-1727. 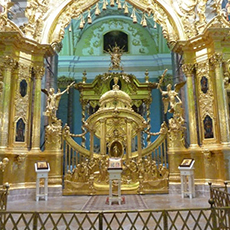 Peter and Paul Fortress is a beautiful sight during white nights.